The aim of this project is to recreate wound glass beads from the major periods along a timeline of bead history. I have worked from a range of text and digital sources (new books have become available since I started this project several years ago) and my own photographs taken in various museums in Paris , Nuremburg and London . My research has also included email correspondence with Julia Lobotsky, a curator from the Washington Bead Museum and various publications and websites.

The design of this project is as an ongoing project, which I will continually add to, as I uncover new material through my research. All of the components of this timeline were constructed by me, including Murrine cane and small spacer beads. I will now briefly discuss each of the beads in the timeline and any relevant constructions methods etc. 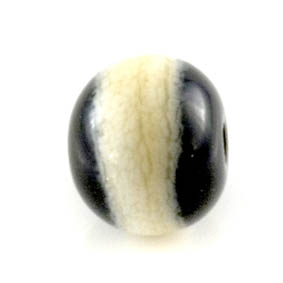 In History of Beads', a bead of this style is displayed with all of the other imitation agate found in this region. As, however, there is possibly 550  1100 years between this bead and the others, I felt it warranted its own section of the timeline. It is a simple black bead with a band of ivory glass. The ivory is quite a reactive glass, which has formed the striations on the surface. 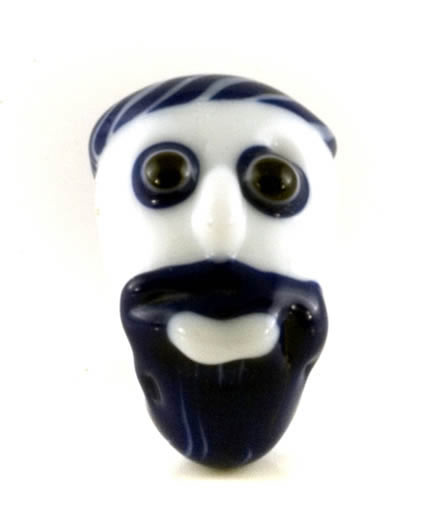 Originally the timeline contained a replica of this entire necklace. As this project has been undertaken so far over the space of at least 4 years, my knowledge and skills have improved. I did not like displaying this piece with the imitation gold beads I had originally used, and this year I also remade the central head bead to a higher standard. The timeline now includes a sample of the eye beads, and the central sculptural face bead. The beads were made from opaque white glass, and both Egyptian and Cobalt blue. Detailed head beads of various styles are common in Phonecian work. This was sculpted by applying molten glass in small amounts, and manipulation into place with a pick. 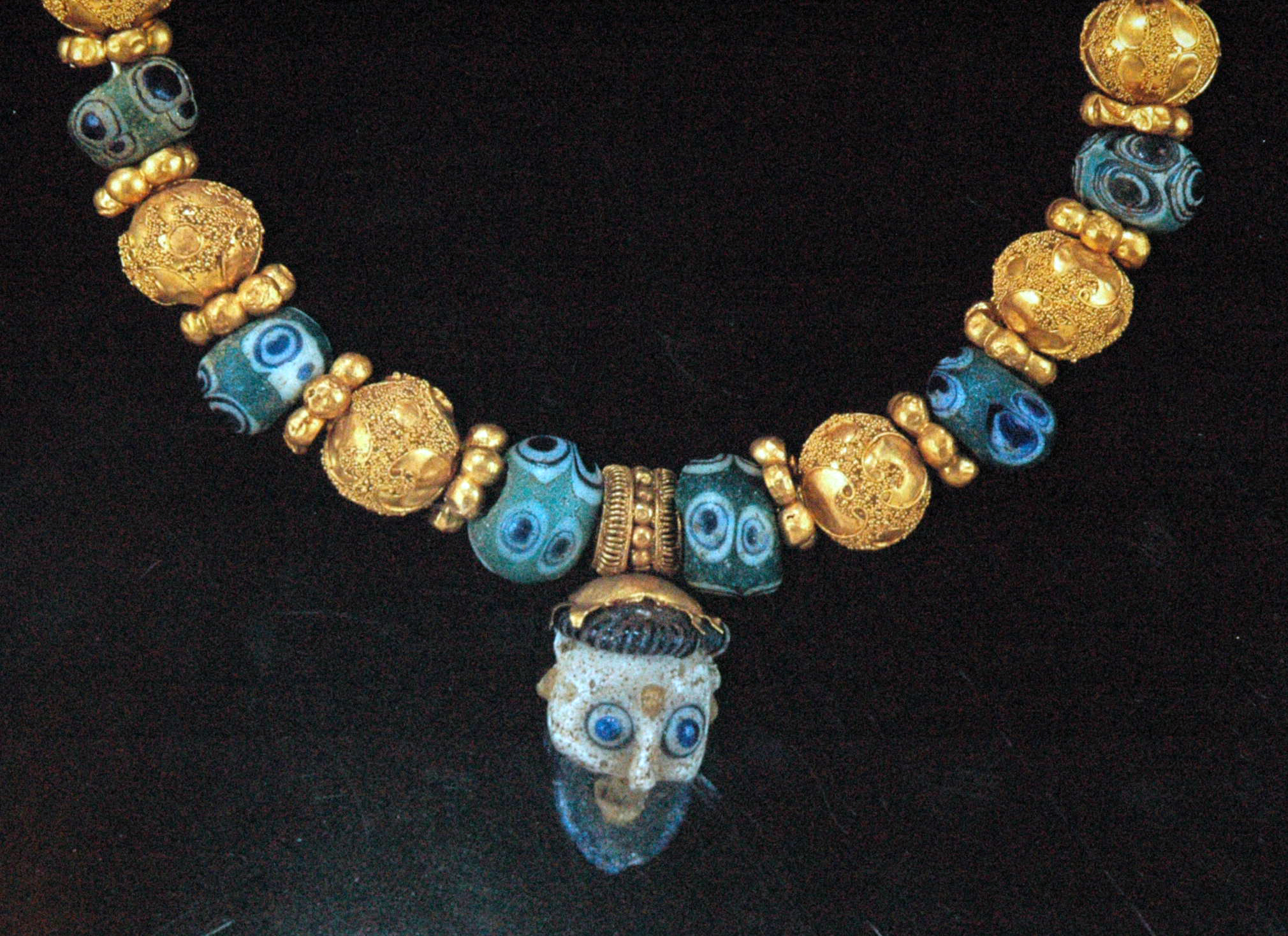 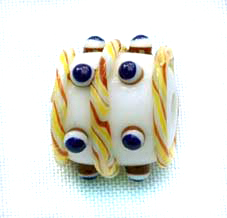 This is another style of Phonecian bead. I wanted to demonstrate how advanced techniques were in this early period  such as in the sculptural face bead, and in the twisted stringer applied to this bead. I created the twistie' before beginning the bead, by painting stripes on the side of a blob of glass, and then drawing and twisting the blob into a narrow stringer' of twisted cane.

Yet another style of Phonecian bead. This face bead is very different in design to the earlier sculptural head bead. To create this bead, I first made a large green barrel bead, then added the yellow face and melted it flat. I then added the eyes. As all of the remaining features are slightly raised, they had to be added last, and given minimal time in the flame, to avoid them melting into the base bead.

This type of bead is often found in fourth century BC contexts, in the eastern Mediterranean, and may have been made in Egypt. I have recreated the bead using a translucent aqua glass for the base bead. Over this I have applied large white dots, melted in flat, with translucent brown glass over the top. I have then used white and blue stringer to apply the 7 smaller dots on each large dot. The whole bead is then heated until it returns to a basically round shape.

This is my favourite period of bead history to recreate. The intricacies of Chinese beads from this period are amazing and I love working with dots. In this case, I have closely recreated one of the beads from the Louis Sherr Dubin book (far right above), but the others are created 'in the style of' the period.

There is very little evidence in the main texts I referenced of beads from England and France . The styles were similar to many Viking and Roman beads  lots of eye beads, raked lines etc. The beads of this style were the only suitable illustration in The History of Beads' of this period/geographic area, so I chose to recreate them. This is an area I will expand in the future, using the M.Guido book.

Roman Face Beads are made by creating a murrine or cane of the face, and applying slices to multiple beads. Creating the canes is a painstaking process, involving making a cane of each component, eg eyes, mouth etc separately, and pulling the cane multiple times as you combine the components. Face canes may also have been created by bundling stringer together to create the design, then fusing the glass together, and pulling as for normal cane. My cane has been created using the first method.

The Roman period is identified as 100 BC  400 AD. Alexandria , however, was a centre for mosaic cane production from 300 BC  100 AD. As very few late period Roman face beads have been discovered (only 2 dozen as opposed to thousands of early period) I have identified the central dates for Roman face bead production on the timeline as 100 BC  200 AD. 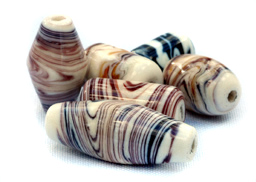 Banded Agate was frequently imitated by ancient Roman bead-makers, often so well as to make it difficult to distinguish them from stone. The beads I recreated here were found in Iran, the majority being created during the Roman Period.

My recreations are made from a base of white or ivory glass, with bands of dark brown or black stringer applied. The molten bead is then rolled on a marver to help gravity cause the folds and twists in the pattern. Some of them were also manipulated with a tungsten poker. Some of the examples have a transparent amber glass added for depth. The beads on the ivory, rather than white, base have the added effect of the reactions occurring between the chemicals in the glass, which often causes an organic' effect.

Transparent semi-precious stones were popular in this period, hence the use of translucent glass in these beads. As the glass of that period would probably not have been as clear and pure as our transparent colours, I have chose to etch the beads. I experimented with several types of glass, etched opaques and transparent, but I decided the translucent glass looked most accurate. Each of the small spacer beads, numbering over 100, were also hand made by me. 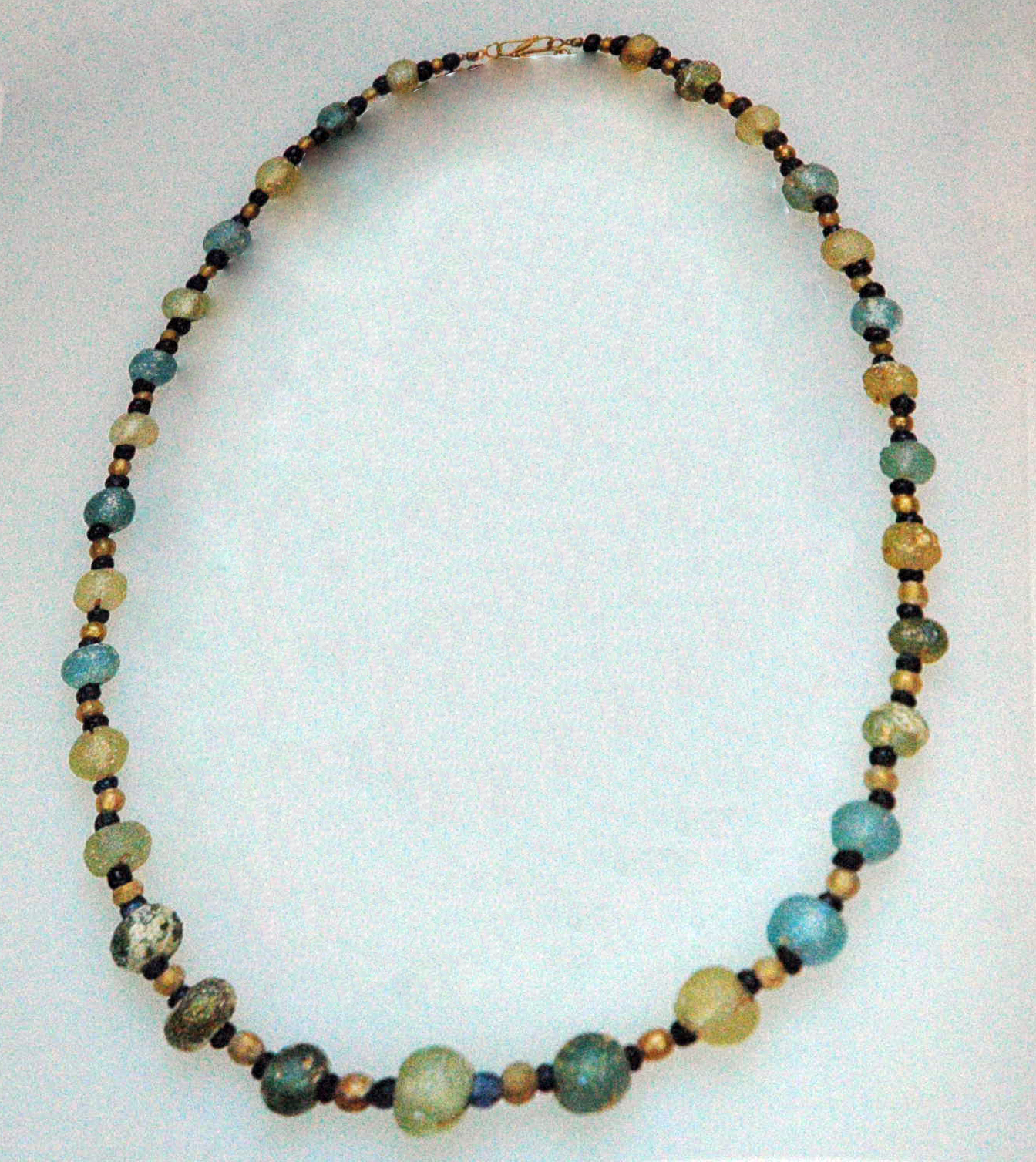 These beads were recreated from examples I photographed in the Louvre. The red bead was made by placing a white stripe around a round red bead, and cutting the grooves into the hot glass with a knife.  The other two are made with a very similair technique of stacked dots, placed in alternating rows, however in the 'bumpy' bead, the dots have been left raised, rather than melted flat, and there is a fine white line between the rows of dots. 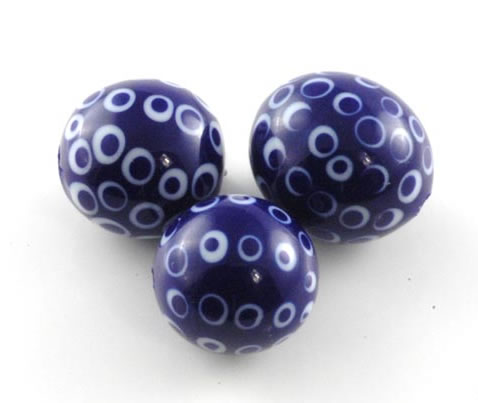 These beads were recreated from examples I photographed in the Louvre. I have recreated them using a dark cobalt blue glass, and applying white dots in angled rows.  A second layer of blue dots is then added, before the bead is once again melted round. 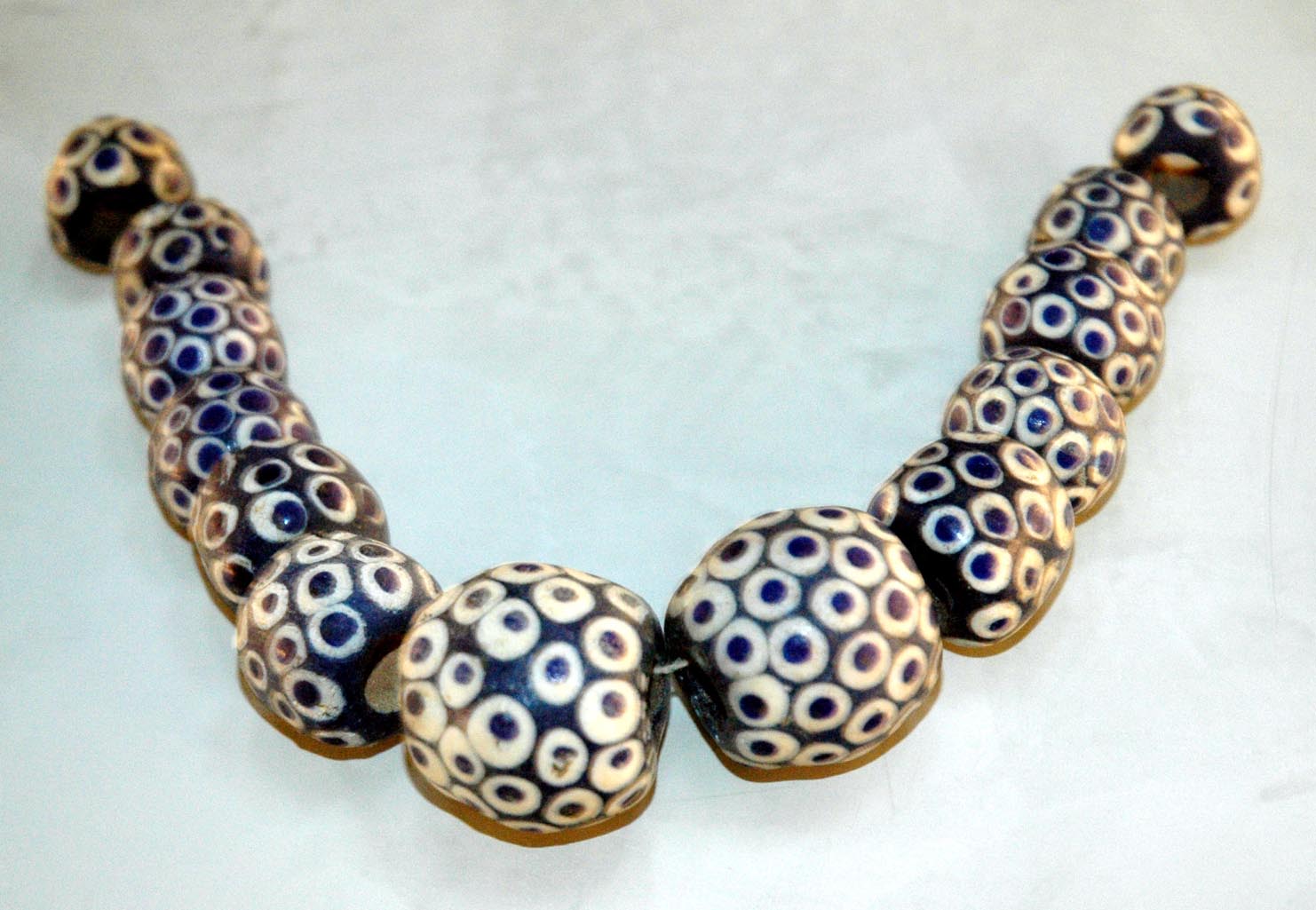 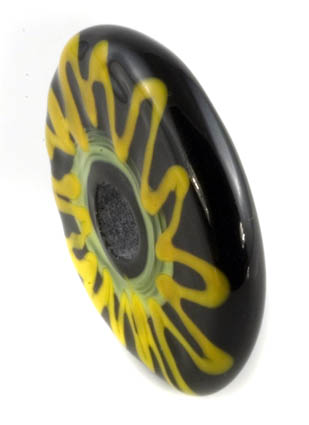 I recreated this bead from fig 111a in Birte Brugmann's 'Glass Beads from Early Anglo-Saxon Graves'. It was discovered in Kent, in the UK. 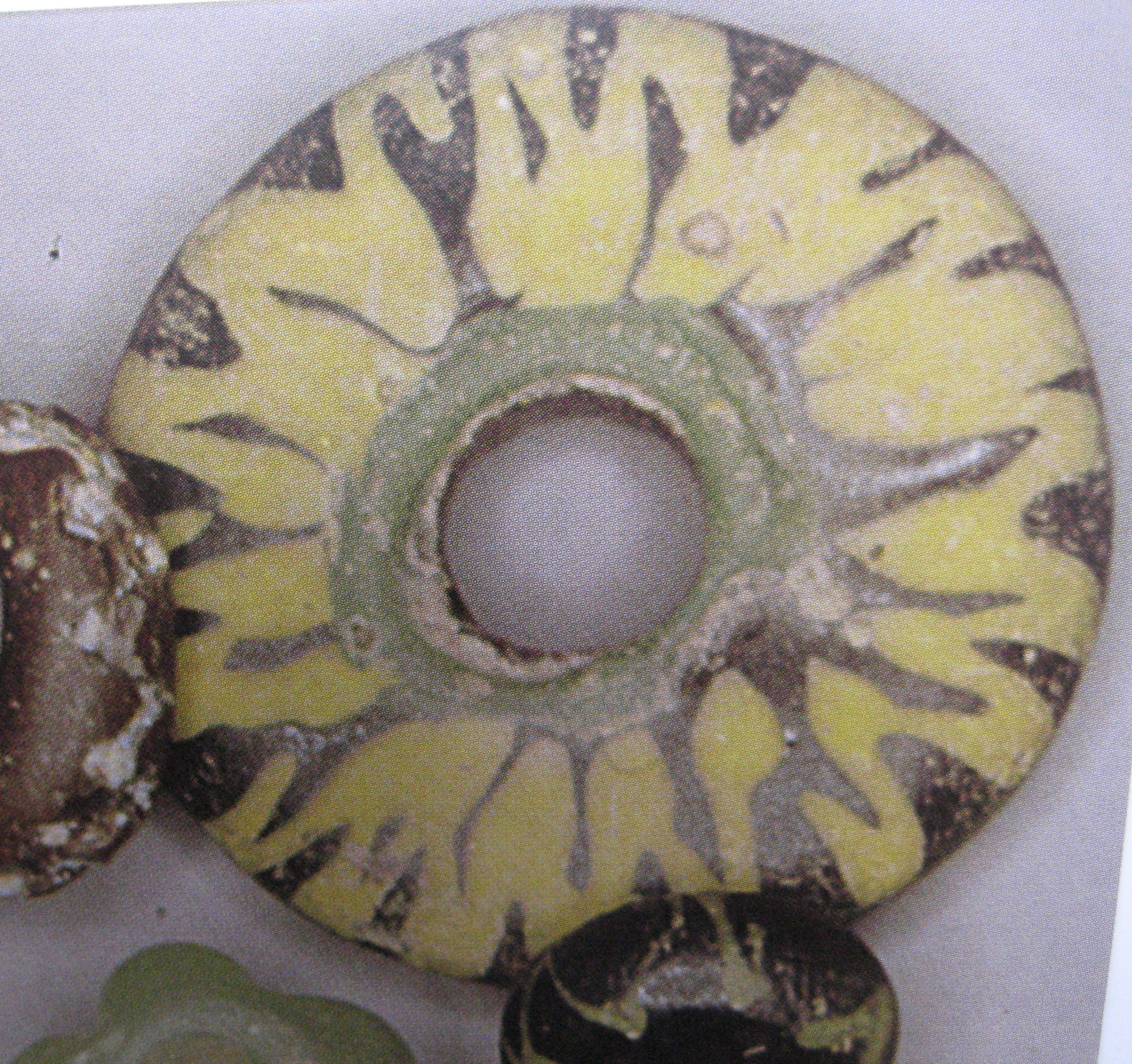 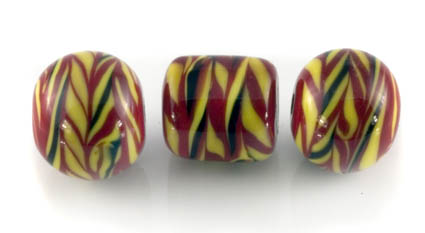 I recreated these beads from fig 127 in Birte Brugmann's 'Glass Beads from Early Anglo-Saxon Graves'. It was discovered in Kent, in the UK.

I recreated this bead from fig 138 in Birte Brugmann's 'Glass Beads from Early Anglo-Saxon Graves'. It was discovered in Kent, in the UK.

I recreated these beads from fig's 131 & 134 in Birte Brugmann's 'Glass Beads from Early Anglo-Saxon Graves'. It was discovered in Ireland. It is evident from the spirla helix pattern displayed, that these beads were made using latticino - a twistie cane made by applying stripes of colour (in this case, white and pale blue) to clear glass. When the cane is applied to the bead, you cannot see the clear, which allows both sides of the twisted cane to be visible as surface decoration.

I photographed a bead in this style in the British Museum.  My recreation is in my Viking Necklace and was created by making a narrow disc bead, using fine stringer to apply concentric rings on the sides of the disc, and then raking the lines to a point towards the centre of the disc.  It was them marvered into the angled shape. 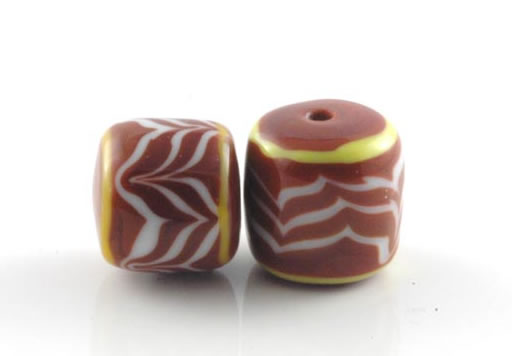 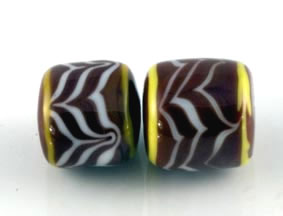 I saw beads of this type in both the British Museum and the Louvre. My beads were made by forming a barrel shaped bead and placing thin white stripes around the barrel with fine stringer. These lines were then raked to form the zig zag or wavy pattern. Once they were melted in, a thin line of yellow was applied to each edge, and again melted flat. 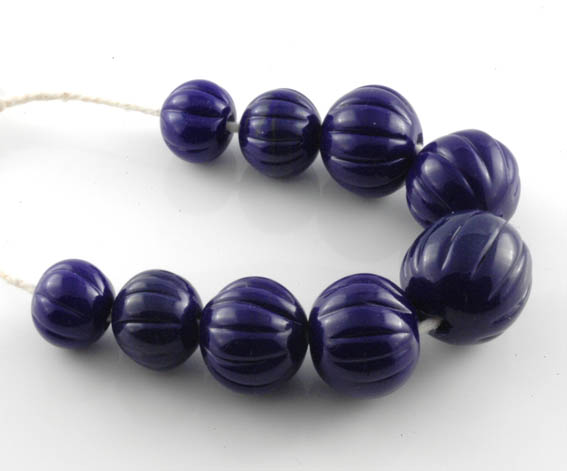 I saw the originals of these beads in the British Museum.  I have recreated them using a dark cobalt blue glass. First a round bead was made, then grooves are created by cutting into the hot glass with a knife.

I have created the murrine cane for both the black and the blue beads. Murrine is made by created a very large version of the design on a punty', then drawing the body of glass out, producing a long thin cane of the design, and reducing the image at the same time. These are just a very small sample of Viking bead designs available to reproduce. Beads are one of the most common items found in Viking graves, and seem to be class related, as they are usually found in the graves of the wealthy. Beads were created by the Vikings, but the majority were imported. They also imported components for the construction of glass beads, such as ready made murrine blocks. Beads have also been found in Viking sites that were created hundreds of years earlier, perhaps somewhere in the Roman Empire .

This bead is created from opaque black glass with white stringer decoration. Islamic beads appear in many different shapes but frequently with lines or raked decorations. 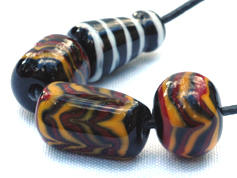 As Islam is an all encompassing religion, including the areas of art and design, to prevent idolatry Islamic art is primarily abstract and symbolic. Beads were a status symbol, with wealthier people wearing gold and precious stones, and less wealthy folk wearing brass, copper, glass etc. The strand of beads I used as a reference contained many different shaped beads with the same surface design. I have recreated just a few of those shapes, using opaque black glass and red and yellow stringer. 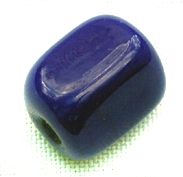 As I explained previously, the majority of beads from this period were drawn, such as the elaborate chevron beads. Simple, single colour beads were wound, and the example here is manipulated, by pushing the sides of the hot glass with a marver, into a five sided shape.

Sources Images - The source images are included for educational purposes only, and have been acquired from the following locations:

**** Personal photographs taken of exhibits in museums, where photography was permitted.

Personal Photographs, and Information Panels from the Louvre and the British Museum